What do you gain by understanding this relationship? When you address someone as "xyz"; is that "xyz" a qualification for the name or for the soul? It may sound like an insane question, but it is actually very valid. Once the soul leaves a body, the body becomes lifeless. There is no name for the body and it is simply referred to as a corpse. The body has no knowledge of a name attached to it; it is the AtmA that recognizes the name. But the AtmA does not have the capacity to physically turn and respond. That is the nature of the body - to perform the physical act of turning once the AtmA perform the act of recognizing. Thus, the thinking part is the paramAtmA and the executing part is the JIvAtmA. We usually don't have a different name for a body or a soul. Whatever name we call the soul also stands for the body. Because of this intimate relationship, the 2 can be considered as 1. Similarly, when the shAstrA says in AbhEda shruti to see everything as Bhrahmmam; it says so because everything is the body of the Bhrahmmam. Though there is only 1 bhrammam to be realized; it automatically flows down to all its parts. A beautiful quote that is an example of tis is when BrahmA says to RAmA after he defeats the war "Jagat sarvam sharIram tE": The whole world is your body.

VishishtAdvaitam can be interpreted as Vishishta yOgi Advaitam: As a connection to advaitam. Advaitam says that I am one and the same as Bhahmmam. Does that mean I am inseparable? For example, you see man everyday going for a walk with a walking stick. He is never seen without it. For you, the walking stick is a part of his identity and it is inseparable. But in reality, it is a removable component. But when you talk out a white dhoti, the white is an attribute of the dhoti and very different from the cloth itself. But they are in inseparable - in this case, one doesn't exist without another. RAmAnujA illustrates this as "Dandi purushah kundali purushaha. ShuklahA patAhA". JIvatmA and chit is related to ParamAtmA and it cannot be separated. This is the basis of sharIrAtma BhAvA.

This is a simple concept and very tangible. Advaitam on the other hand is difficult to achieve since it claims that everything is an illusion and we should not believe everything we see. An example of this is the following story told about an AAchAryA of advaitam. He finished up his kAlakshEpam in a village and was heading back home with his disciples after preaching that everything is an illusion. They had to cross a forest en route and while doing so, a wild tiger appeared. All the disciples ran helper skelter as did the Guru. When they reconvened, the disciples asked the Guru, "Oh Guru, do you not understand the principle of Advaitam or not practice it? If the tiger was an illusion, why did you get scared and run away?" To this the Guru replied, "I have understood Advaitam, it is you all who have failed to. Just as the tiger was an illusion, so was my running away. In reality, there was no tiger and there was no running away on my part"! Lighter vein apart, this concept is very abstract and questionable.

RAmAnujA on the other hand says that everything is not an illusion, but very true. He gives the following example: You wake up in middle of the night and chance to glance at your dark backyard. You see a pillar there, but mistake it for a thief because it is dark and your eyesight is poor. Is it a pillar or a thief? Is it illusionary or real? There is a trace of truth in that there is indeed something there; it is not an illusion - it is a pillar, mistaken for a thief. In some form or structure, there is a similarity between the two - the pillar is dark, tall and sturdy as a thief could very well be. We need to respect this similarity even when in doubt. After all, you didn't mistake the pillar for something like a telephone or television. You envisioned it to be something close to what it really could be. And in this sense, it is not a case of being illusionary, but just that of a mistaken identity. He also gives an example of a rope mistaken for a snake to really drive the point home.

They talk about the nature of the soul who attains, where he attains it to, through what means, for what purpose and the obstacles in doing so.

The Traveller is the JIvAtmA, the destination is the ParamAtmA, the vehicle could be bhakti yoga, nyana yoga, saranagathi, etc; the obstacles in the path of salvation are sarIram, samsAram, ahankAram, etc, enjoyment and final destination could be service to ParamAtmA. 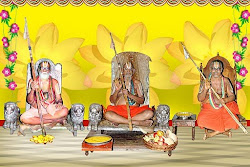